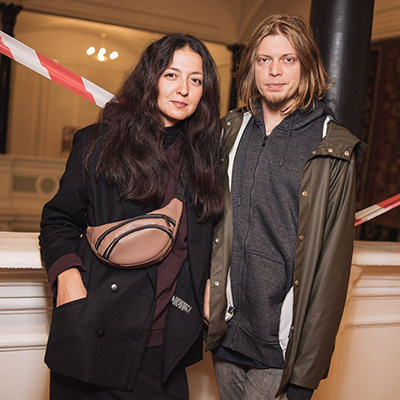 Tarasenko Valeria and Tolkachev Stanislav joined the TxT group, realizing that the difference between their arts and the community of views enriches the interaction and inspires the creation of alternative creative works in real time.
We, as a creative group consisting of an artist, a musician and a photographer, see ourselves as the task of making an act of materialization of an idea into a concrete form, sound or experience.
We work using engagement mechanisms when a group of artists and an audience immersed in interacting with one another, creating a subject of collective creativity.
In our work we strive to create a field in which everyone can, from their own experience, understand the meaning of the emergence of certain situations and impulses in our lives.
Our creativity is a kind of communication with the world, people and ourselves. By interacting with each other, we generate messages and broadcast the memory of what was, is and will be.

Conception of the project “Jesus to Jesus”
Different charms, which are used to protect people and the environment from negative phenomena, play an important role in Ukrainians` lives.
Some charms need special exploring, because their aim is to save general space of the definite society, where individuals are located, for example communities, streets, yards etc. People have believed in magical forces of amulets and symbols for a long time. That is why folks have been trying to set up a connection with the universe and to communicate with it.
One of the most well-known communal charms is a roadside figure. Roadside figures are installed by society to protect the community from diseases and epidemics, wars and natural disasters, and from dark forces too. These charms with crosses or stone images of MatkaBoska (translated from Polish, because Catholic traditions still exist in several regions) are situated at the entrance into the village or at the crossroad.
We have seen such a great example during the art residence in village Travneve. It is interesting to know, that upgrading of the charm, namely the cross with cast sculpture of Jesus, doesn`t mean, that the previous one will be destroyed or thrown out.  Conversely, all the figures are put close to each other on the ground. We have found three sculptures near the statue. That is why we have decided to create a project “Jesus to Jesus”. They have different sizes, shapes, colors. They have been saved in different ways too. Our photo project shows the local inhabitants` careful attitude to their charm at the crossroad. It also proves, that the history of this area is ancient.