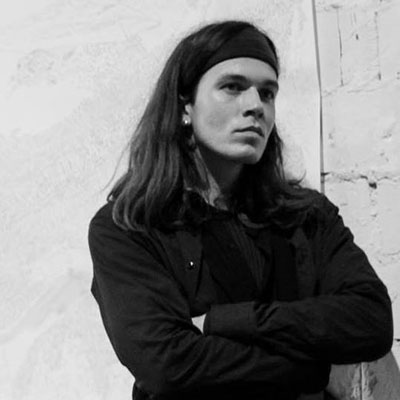 Born in 1988 as a child of cultural, societal, political revolution.
Studied in Europe and Asia. Worked in a store for travels around the planet.
In my work I follow existential trends by observing growing urban spaces, value
of uniqueness (if it still exists), hierarchy of society around me.
The perfection of a human system we live in.
The ability of a person to enter this colossus.
The questions we cannot answer while we outlive our lives.
The absurdity of our stay on Earth.
What does really matter?
In my thirties… still processing.

Once upon a time, I was chosen to spend a creative month
in Ukraine / village Travneve near Ternopil in Ternopilska oblast. The task was simple. To work
with Ukraine village environment and include it in the final project. So the project could be very
free and creative.
According to me, I have never been to Ukraine before and information about your country were
kinda misty / foggy, because while Slovakia is in European Union, we care more about our own
problems or problems of other EU countries, eventhough Ukraine is our biggest neighbour.
So I have decided I will work with imaginative facts, informations and "hoax" informations used
so regularly / often in mass media all around us. So in the end, one person cannot say for sure
which information is true and which is false. In my project my "hoaxes" are so bizzare and over
exaggerated so yes, we can say its definitely not true but as an observer who has never been to
Ukraine before, you cannot tell...or you will be left in a doubt. So in general, my main goal is to
warn or remind people that we all need to think and check all the news and informations we are
getting from the viral or mass media, because it may produce incalculable events. We need to
think. (one more time)
SO that was the concept in short and now lets talk about the formal stuff of my exhibition. I have
divided my works into 3 sections. First section comes from observing Ukraine as a country from
societal stage and how does it work -> like the church of ukraine, how does the country look like,
how does the people in Travneve look at me when I came and so on. The second starts working
with that false hoax information I was talking about above. So you can see the science fiction
futuristic cities, castles where ukrainian aristocracy lives (which rules the country = oligarchy),
then there is of course the mention on the civil war in Donbas and anexion of Crimea / again
overexaggerated -> so we follow the russian occupation with russian star/ space ships above
Kyiv. The third part works more closely and draws "the real houses of ukrainian people" so we
see the neo baroque house with an interstellar ship behind it for travels from Ternopil to Charkiv
(for example). The final step in my work is an idea, that Ukraine is so so big country in
comparisson to Slovakia (only 5 million 5 hundred thousand people), so according to this false
information , one can say that he saw dinosaurs running around in the fields of Ukraine.